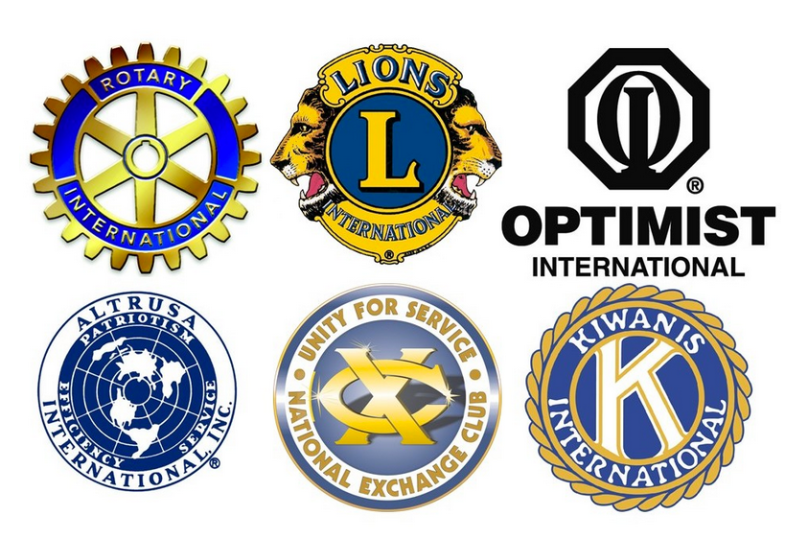 • This essay was written by a member of the Oregon City (OR) Rotary Club who has been an entrepreneur, motivational speaker, and human services activist for decades.

Nothing more American than a service club. Rotary, Lions, Kiwanis, IOOF, Altrusa, Shriners … Frenchman Alexis de Tocqueville rode all over the United States in the 1830s and was struck by the influence of religious, fraternal and civic organizations, and secret societies, on American democracy and concluded that they made communities stronger, more interesting, and more engaged.

But, there are some reasons for concern. All of these service clubs, once the backbone of community life in America, have been in significant decline over the past two or three decades. It is not that our clubs have changed. America has changed. Thus, the imperative is for us to reinvent for a new America.

In his 2000 book “Bowling Alone: The Collapse and Revival of American Community,” Robert Putnam documented that attending club meetings, such as those held by Rotary and Kiwanis groups, has declined by 58%  in the period 1975-2000. This trend continued and even accelerated in the 21st Century. Putnam notes it’s part of an overall trend by Americans who also have 43%  fewer family dinners; 35% fewer of us have friends who drop in to see us at our homes.

Pick an organization and the numbers are telling. In the past two decades Rotary down 20%, Jaycees down 64%, Masons down 76%. Recalling de Tocqueville’s observation
about the role our clubs play in a civil society, this decline represents a tangible loss to community. The question remains, “Where do we go from here?”

Since most service club leaders are in office for but one year, they shoot for short-term quick fixes such as a membership drive. However, for most of our service clubs the issue is not recruitment but retention. Rotary averages 44,000 new members per year and loses an average of 51,000. They cannot keep members. If businesses are not keeping customers, the leaders generally make it top priority to find out why and correct the reasons. If they fail, they most likely will not be leaders for very long. Common sense says the same principle should apply to service clubs as well.

The classic definition of community is associated with a physical place, hence many of our service clubs are branded with a “place” such as Jamestown Lions Club. But,  emerging generations of Americans now define community by their affinities: the gay community or the tech community. Even college alumni groups now tout themselves like independent countries such as “Spartan Nation” at Michigan State University.

Seth Godin is an entrepreneur who ruminates on marketing in the digital age. Author of several best-selling books, Godin argues that digital life has ended traditional mass communication and replaced it with an ancient human social unit, The Tribe. These are groupings of people founded on shared ideas and values. As such, tribes give ordinary people the power to lead and make big change.

In the new world, what people desire most is an opportunity to connect with one another. People like bonding with other people. It’s human nature. If we create opportunities for people to connect, they’ll open up and feel more comfortable. As they do, they’ll invite us into their lives and will introduce us to their friends. Then their friends become our family, our tribe. One by one we rebuild our clubs.

The data is so overwhelmingly convincing. One-half of charitable giving in the United States is not driven by what people care about, it is driven by what their friends and family care about. Consider the charity walk or bike ride. Most of those involved have little driving passion for the issue at hand, but join up to walk as part of a team organized by a friend or family member. It’s their community. The service clubs which will thrive in this new era are the ones who build out their tribe.

The speed of American life has picked up. While we are not working that much more than previous generations, we are spending vastly more time in what might be called “structured leisure activities.” This is especially true for families with children. For them, time is more prized than talent or treasure. For two-parent families, both are often working and sharing household and child rearing duties.

So, what will attract them is not so much our mission, but how we can add to the quality of their lives. Their time is precious. So, how can we adapt in order to make ourselves more welcoming to this emerging America?

Build An An Informal Atmosphere

Is the format of our club outdated? Is the weekly lunch/dinner/breakfast a productive format? Are the rituals in our meeting making sense to younger Americans? Many try to sidestep or ignore these impediments rather than deal with them. That’s human nature because the most powerful force in the world is the status quo.

But, Americans now connect online so don’t need the time investment of a weekly meeting to network. Leaders must identify and remove obstacles. Is the structure of our club meetings an obstacle to involvement? One thing is abundantly clear: What emerging generations want in physical meetings is for the environment to be fundamentally social, fundamentally conversational and fundamentally less formal.

Enable Them To Bring The Whole Family

One of the encouraging trends in modern America is how men have taken a much more active role in child rearing. Some of this is driven by women’s increasing role in the workplace and some by men desiring to play a more intimate role in the development of their sons and daughters.

These two-parent, two-career families have higher than average incomes and should be a priority to our recruitment strategy. They earn more and are more active than other demographics. If we want to get them we have to offer a milieu that permits and engages their children as well, for they will not give up valuable family time for anyone. So, does our club offer a family friendly environment?

Will this attract the next generation?

TED talks have become the gold standard among young professionals because such  sessions arouse followers’ thoughts and imaginations, as well as stimulating their ability to identify and solve problems creatively. People gravitate to places containing others who awaken their curiosity, challenge them to think and learn, and encourage openness to new, inspiring ideas and alternatives.

While we may not be able to book high-level speakers, we can look at altering meeting formats. How about facilitated discussions around a pressing societal issue? How about reflective exercises that engage members to think deeply about a topic?

People love environs that awaken their curiosity, challenge them to think and learn, plus encourage openness to new, inspiring ideas and alternatives. These elements are essential to pulling in the emerging generations and thus ensure club success.

Let Them ReThink You

It’s not “Come do what we do,” it’s “What do you want to do?” Can our club be an incubator for young creatives to develop new and interesting ways to address our traditional issues?

One aspect of emerging generations is their desire to have an impact now. It means they will not wait five years to be elected chair of the fundraising committee before seeing their ideas in action. If it’s not happening today, they’ll walk away.

Victor Hwang, in his book “The Rainforest,” metaphorically notes that most of us were trained to manage farms. By this he means our approach to anything is that we know what we want to grow, know when to plant the seeds, plant in straight lines, kill anything that looks like a weed, know when to harvest, and can anticipate roughly our yield. The rainforest, by comparison, is a chaotic environment in which all sorts of genetic mutations are taking place and everything looks like a weed.

Hwang’s point is that we need more rainforests. But, that means relinquishing some measure of control. Not always easy when we have 60, 80, 100 years of tradition behind us. Yet, by allowing emerging leaders to reinvent our club we can navigate a path to securing our survival.

Service clubs are an American innovation that have evolved into a worldwide institution. While vibrant across the globe, the loss of membership in the United States represents a loss of social capital and civic engagement.

Today, potential members are constrained by lack of time. In addition, they may not see much use in an organization whose prestige and vitality is in question. It is imperative we reinvent.

That may involve passing the torch and allowing an emerging generation of leaders to reinvent our clubs according to their needs. The alternative may be irrelevance and obscurity.

• This essay elicited some robust discussion on the author’s blog. Click here and scroll down past his post to read some of the wide-ranging experiences and comments from others.