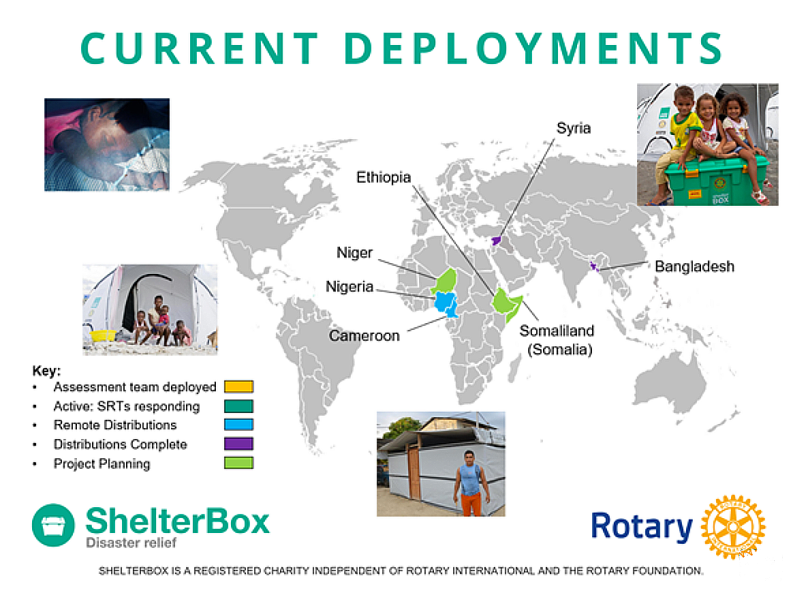 ShelterBox’s continually shifting emergency aid operations continue as one disaster after another hits around the globe.

The organization not only arrives as a temporary help in areas hit by tornadoes, earthquakes, landslides, and the like, it works in a number of areas on an ongoing basis. Here is the latest of its periodic reports on the latter:

Monsoon Flooding: Since July 7, heavy monsoon rains have triggered flooding in low lying areas of Bangladesh, leaving one-third of the country under water. Four distributions have been carried out, sheltering 745 families this year so far. ShelterBox has responded to Bangladesh five different times for flooding and/or displaced populations. We’ve sheltered more than 9,100 families here.

Conflict: ShelterBox has been responding to Syria since 2012. We’ve helped shelter more than 50,000 families, and we now are preparing winterized distributions.

Conflict: Millions of people have been forced to flee their homes because of violent conflicts and climate change. ShelterBox has responded to Ethiopia three times due to complex emergencies, sheltering more than 3,500 families.

Drought: Severe drought is devastating thousands of families in Somaliland. The drought has killed up to 80% of the region’s livestock, forcing families who rely on farming them to leave their homes in search of basic services and alternative livelihoods. ShelterBox has sheltered more than 4,000 families since 2017.

Terrorism: The violent rise of the insurgent terrorist group Boko Haram began in Nigeria in 2009.  Since then, 2.4 million families have fled their homes.  ShelterBox has sheltered more than 11,000 families since 2015.