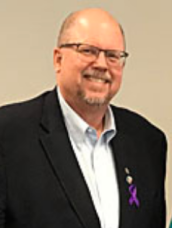 Just before Christmas, I wrote an email to all Rotarians in District 7190 about “Hope.” It was a good theme for the time of year, a time when most people and most faith traditions are celebrating in some way or another. And, I always had in mind that I would follow my email about “Hope” with an email about “Fear,” which would be timed to coincide with the beginning of a new year.

Not to suggest for even one minute that we all should be fearful about 2018. Quite the opposite, actually. It would be too easy to succumb to fear, in a time when lots of our community and political discussions are focused on division and not unity, on differences between us and not the values we commonly hold.

A few weeks ago I had the privilege of speaking in front of a group of students from Giffen Elementary School in Albany. The Albany Rotary Club had organized an assembly event for them, and asked the chorus from the Beverwyck Senior Living Community to come and sing Christmas carols. When I got there, club president Moses Kunda asked me to speak for five minutes to the students. I hadn’t really expected that, but I told him I would.

A very small group of singers from the school got up to sing a few songs, which gave me a moment to think about what I might say. That’s when I spied one of those fantastic Rotary pull-up banners up on the stage, proudly displaying “The Four Way Test.” So, I decided I should try to explain to them how important the test is in the lives of Rotarians.

I stood up and pointed to the banner. I asked them if they always told the truth and if telling the truth was an important thing to try to do? Yes! And, what did they think about fairness? How did they feel if someone treated them unfairly, and did they feel better about themselves and others when things seemed to be fair? Yes! What about friends? Wasn’t it great to have friends, to play with and be with and do nice things for? Yes! And how about this big word – beneficial? What did that mean? It means that we can all do things which help other people out. Isn’t it good when someone helps us out? Yes!

When I was done I inducted them all into Rotary on the spot, making them “junior Rotarians,” and encouraged them to remember that telling the truth, being fair, making good friends, and helping others were good things to do all the time.

And then I sat down.

It was time for the chorus to sing, and they started in on all the holiday songs they knew the kids would like. As everyone was singing I started to listen to the words of these Christmas songs that I have sung for six decades. “Deck the halls with boughs of holly …’tis the season to be jolly” and “Chestnuts roasting on an open fire” or “Oh, the weather outside is frightful, but the fire is so delightful,” and so on.

It suddenly dawned on me that most of the images from these songs were far removed from the reality of the daily lives for many of these kids. Giffen Elementary is in a tough neighborhood in Albany, and it’s not likely there are many fires in fireplaces or boughs of holly put up in their homes. And, for some, not many presents from Santa, either.

Yet these kids were singing and laughing, and they knew all the words and were all having fun. I realized they were enjoying a moment of community, of being together, in a safe place where the troubles of the world or their neighborhood were far away from them. And, that watching a bunch of old folks sing some songs up on the stage was what they needed at that moment because they were having a good time simply being in the moment.

I realized that our children are hungry for the things that can bring us together — a simple song in a safe place, with people who care about them. That it’s much less about the lyrics which might point to all the ways we are different, but rather the opportunities and experiences we can share together.

And, that’s the truth which is in “The Four Way Test.” When Rotarians try to live by it we are sharing values that bind us, that bring us together despite all the ways we are different. When we work in foreign places we don’t need to speak the language; what we do says everything necessary to explain who we are and what we believe. When we work in our own communities we don’t seek praise or acknowledgement; we just do what needs doing and demonstrate by our actions that we believe in truth, fairness, goodwill, friendships and beneficial service.

When we give our time and efforts to service, the work is hard and the benefit is sometimes hard to see. But, more often you can see the benefit right in the eyes of the person who sees you, who sees your eyes and the joy you are sharing with each other.

There is no fear of division or differences that can overcome this joy. And so, that is the promise of 2018 and beyond — that we work hard to better humankind in all the ways we can, and that we look right into the eyes of those we serve and say, “I see you. We are the same. We can solve these problems and make things better. Let me help you so someday so you can help another.”

Here’s to a joyous 2018, free of fear and filled with hope, promise and prosperity for all.