MEETING NOTES: President Andy greeted members and guest Valerie Rapson of the Dudley Observatory. … Bill Dowd reported that our scheduled April 13 shredding and recycling day was being jeopardized by a free recycling event the Rensselaer County government has scheduled for the same day. He suggested postponing our event until May to avoid competition that could hurt this major fundraiser. The consensus was that we would follow his suggestion and he and Murray Forth would work on rescheduling the necessary recycling companies and publicize a new date. We also decided to expand the list of what items we will accept to include batteries which most such events do not accept. We have a buyer for such items. …

Phil Kellerman handed out an announcement about a benefit concert the club is sponsoring to aid the Oley Foundation, a nonprofit that provides education, advocacy, and networking opportunities to people living at home on IV nutrition and/or tube feeding. (Phil works for the local Oley office.) It will be held at 6:30 p.m. Thursday, May 9, at Quigley’s when the performers and Phil debut their just-completed CD. (The members-only dinner will be held from 5:45 to 6:15 p.m.) Suggested donation to the foundation  from members of the public in attendance is $10. … Doris Calamaras mentioned the possibility of several small fundraising ideas — customized pens, gift teas. They will be discussed at the next Board meeting. …

Jim Leyhane reported the Saturday, May 11, defensive driving course at Quigley’s now has enough people enrolled to become official although registration  for the 11 a.m. event remains open to Rotarians and others. Please see Jim if you are interested. …Becky Raymond and Bill Dowd will represent SRC at this Saturday’s District 7190 Rotary Grant Management Seminar in  Schenectady. … Next Wednesday, April 10, is the reservation deadline for the Rotary Home Cooking dinner being hosted by Dean and Doris. Please contact them if you wish to attend.

Charlie Foote introduced our guest speaker, Valerie Rapson of the Dudley Observatory in Schenectady. She was appointed head astronomer there in 2015. Valerie has a Ph.D. from the Rochester Institute of Technology in astrophysical sciences and technology. Earlier, she earned a bachelor’s degree in physics and astronomy from the University of Rochester. She also has extensive research experience and is an expert in astronomy education for people of all ages.

Valerie explained the changing mission of the Dudley, which was founded in 1856 in Albany on what was known as Goat Hill, near what now is the Arbor Hill Elementary School. A successor observatory was built in 1893 on South Lake Street on land that today is home to the Capital District Psychiatric Center.

Over the years, the Dudley transitioned from research to education as celestial sciences changed and small ground-based observatories became less important. It moved to the Museum of Innovation and Science (miSci) in Schenectady in 2013, and in 2015 entered into a partnership with miSci to provide astronomy programs and education.

Valerie explained the numerous outreach programs ranging from working with students to holding observation sessions and other programs for seniors and the public at large. The Dudley also allows non-staffers to access its archives for research. Among the many documents and books are hard-copy versions of every one of its Astronomical Journal magazines published since the 1860s.

However, the Dudley hasn’t completely gotten away from being a functioning observatory. Last summer, a modest observatory building was constructed to house a 14-inch computerized telescope. And, Valerie said, a long-range goal is to build a new domed observatory and classroom to house the reassembled 1893 Pruyn telescope currently  in storage. 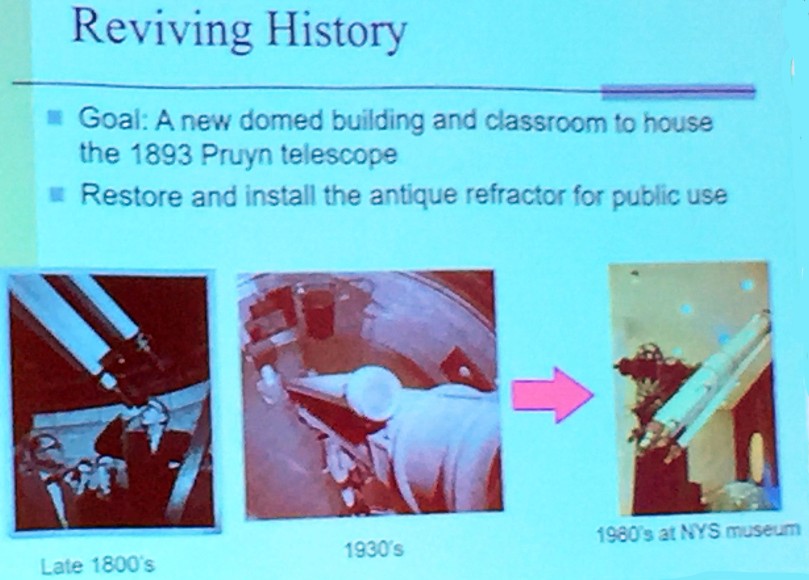 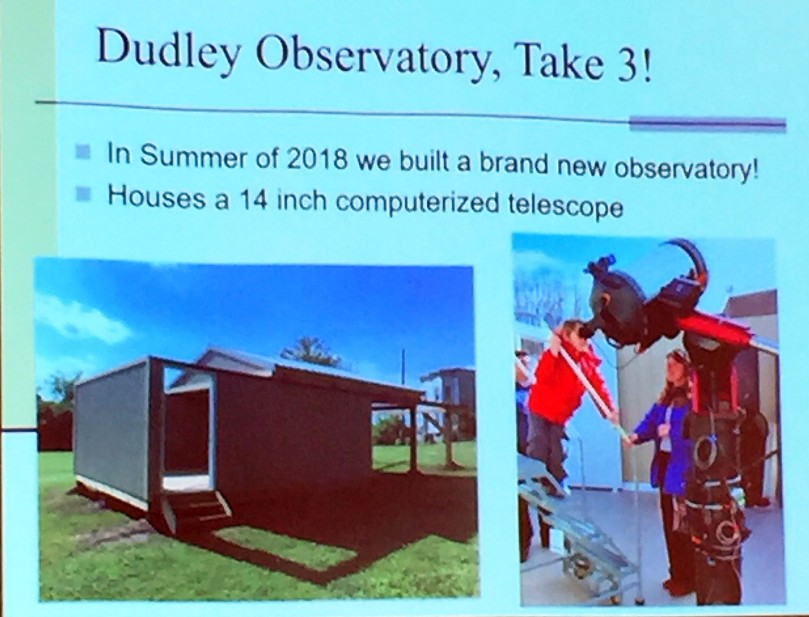