Breakfast Meeting
at the Greenbush YMCA
East Greenbush
May 17, 2018 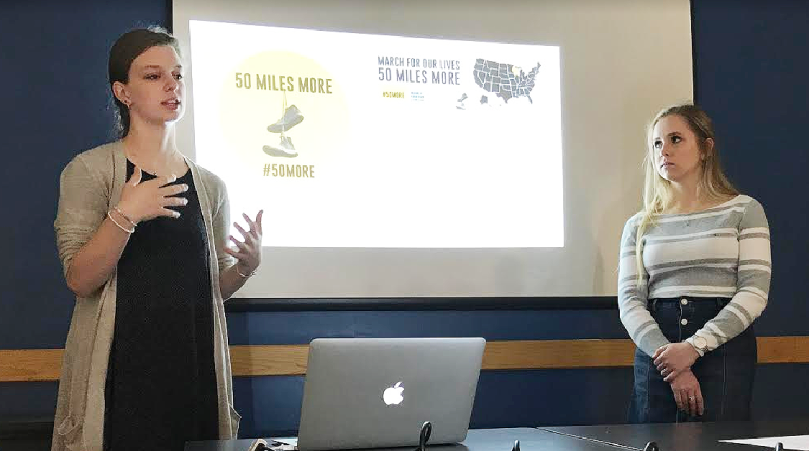 This month’s Third Thursday breakfast meeting was a student-centric one.

Students Lilly Hutton and Heather Pangburn (seen above) of Columbia High School gave a presentation on the “We Rise” student movement seeking to make their voices heard about action to be taken in the wake of a series of mass school shootings.

As a result, the students created a local chance for expression. On March 14, the event was held at the school auditorium with the expectation that 30 to 40 people would attend. As it turned out, more than 600 students participated. They then decided a group should go to Washington, DC, to take part in a major demonstration and started a “Go Fund Me” campaign to cover travel costs. A group of 24 students and three parents participated in that March 24 event.

As a followup, several students participated in a Capital Region school walkout on April 20, and invited and paid for two students from the Parkland, FL, school where the latest mass shooting sparked the national student demonstrations. There was a 13-minute “lie-in” in memory of the 13 students killed in the 1999 Columbine, CO, shooting. The group next is focusing on a 50-mile walk for late July.

Their efforts have raised discussions about the issues of safety, drugs, mental health concerns, and bullying issues in the schools. They said students now realize they do have a voice with politicians and state agencies. They will consider how Rotary may assist in their efforts.

• The Star of Hope memorial to students who died before graduating from Columbia will be refurbished during a June 9 joint workday with SRC and CHS students. That project was discussed by the attendees, including CHS Principal and SRC member Mike Harkin who is working with the students. SRC will coordinate with Faddegon’s Nursery in Latham for flowers and other materials.

•  SRC’s Youth Committee co-chairs Matt Smith and Shannon Romanowski reviewed communications regarding both RYLA and scholarship letters sent to local high schools. Mike Harkin, Mike Bennett, and Jeff Simon indicated that communications should be sent directly to them to expedite responses from Columbia.

• The same educators expressed support of SRC’s plan to apply for a grant to help cover the cost of scholarships and will write letters of support for the grant being submitted to District 7190 for the 2018-19 Rotary Year.