Ella Câncio, who had visited us several months ago, paid a return visit as her Rotary Youth Exchange year nears its end. 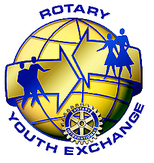 She showed us a map of her home area in Brazil, including her hometown of Ubá, a city of about 100,000 residents in the state of Minas Gerais about 75 miles north of Rio de Janiero. And, she shared photos such as one with her parents, her brother, and her sister, and one of her house.

Ella explained the differences between her home area and Schodack, where she has been attending Maple Hill High School. She said she has enjoyed the get-togethers with other exchange students who are studying in this region, and showed photos of some of those events. Ella also had photos from her school in Schodack and the three who went to All County Chorus. She said she has participated in softball and track, both of which she liked.

This was her first Halloween and she showed us photos of her in costume and also her seeing her first snowfall, a special experience since she never had seen snow before.

Ella said she began English classes outside of school at the age of 11, which is why her English is very good. She said she will have a year to a year and a half more high school  when she returns home, then probably will attend university which is free.

She said her favorite food is tacos, and she has been making desserts for her host family. She also said might teach her family and friends how to play softball when she returns to Brazil.

POLIO VIDEO — Roberto Martinez reported that the project is nearly finished. A 10-minute excerpt  will be shown at the District Conference next Saturday, May 6, in Lake George.

RECYCLING DAY — Murray Forth reported on the event scheduled for this Saturday, April 29, at the Wainschaf Associates warehouse. Several members are signed up to help staff the event, but anyone else who wishes to volunteer is welcome. Both the ad and the news article from The Advertiser for the event were circulated.

SHAKER HERITAGE PROJECT — The Area 8 interclub cleanup event at the Shaker Heritage Site in Colonie is scheduled for Saturday, May 20, and volunteers from SRC are needed. A signup sheet be circulated at next Thursday’s dinner meeting.

VALLEYCATS ROTARY NIGHT — Terry Brewer is handling tickets for our annual picnic-and-ballgame event at Bruno Stadium on Thursday, July 27. The price of tickets has gone up by $1. Terry will get tickets and start a signup sheet soon.

OFFICER NEEDED — We are in need of someone to step up to become President-elect for 2018-19. John Sawchuk had been in that position, but will be moving out of the area before then. Anyone interested should contact Debbie Rodriguez or any other member of the SRC Board.

NEXT MEETING — 6:15 p.m. Thursday, May 4, at Quigley’s. We will be inducting new members and giving out awards.