NOTE: Corrections included in this version.

President Terry Brewer introduced Betty Brewer and Debra Dewey and gave a brief outline of their role in the Averill Park Central School District offering physical and occupational therapy in an educational setting.

Betty explained that she and Debra, along with a speech therapist, are a team that serves 180 kids. They work with students who need to learn a variety of skills, and they utilize tactile items in various shapes and colors, games, and various exercises.

The children they work with have a range of problems, including autism, cerebral palsy, sensory and processing disorders, and other limitations.

Debra explained that they work to instill in the students a mutual respect for others, and attaining a goal of  improving and moving on. They work with children as needed and for as long as needed.

A new program in this school year is teaching strategies for coping with habits, not sitting and fidgeting, and so on. The team often uses therapy balls instead of chairs for better posture. They work on fine and gross motor skills, directional skills, exercise on mats, and sitting and getting up correctly. They also include time for play.

One of their main efforts is working on “sensory integration,” which affects multiple areas of muscle, senses, and auditory faculties. They work in a variety of ways — in groups, independently, in classrooms, and separate rooms. They displayed many small tactile items they use with the children,, such as soft, squishy balls, colorful soft items that light up, and pencils with soft grips.

In conclusion, they answered several questions from attendees.

REMINDERS — (1.) The “Pocket Change” contribution jug now is being used to collect money at each meeting for the Freedom From Fistula Foundation. (2.) The club officially has decided to raise $1,400 to “adopt” a school in Haiti as part of the Pure Water Project’s effort there. An initial donation will be made in the amount of $500.

WEB PAGE REVAMP — Since our last meeting, a redesign and relaunch of the club website has taken place, and the new address —  http://SRCrotaryblog.wordpress.com — is  active. Several new pages are password-protected. They still are in development, and passwords will be distributed to members once the content is finalized. 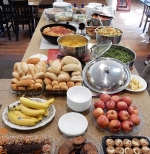 GOLFING EFFORT — The club donated $250 for Columbia High School’s golf tournament being held in support of the school’s scholarship programs.

PRESIDENTIAL CHANGEOVER — Our Thursday, June 30, meeting has been designated as the annual Presidential Changeover meeting. Debbie Rodriguez will succeed Terry Brewer as president at that time for the 2016-17 Rotary Year. The event will be held at Murray Forth’s residence in East Greenbush.

NEW-MEMBER INDUCTION — Our second member induction of the year will be held during our Thursday, June 23, meeting to officially welcome members who have joined us since the last induction.

SUMMER ACTIVITIES — At the next meeting, we will begin asking people to sign up to host a cookout or plan a group outing during our “summer casual” schedule when we do not hold formal weekly dinner meetings. The dates are July 7, 14, 21, and 28, and August 4, 11, 18, and 25. Ideas are welcomed.

ELECTION OF OFFICERS — We will conduct the annual vote for club officers and directors at our May 26 meeting.

FUNDRAISERS — (1.) It was announced that the raffle for a sightseeing flight in an antique plane at the Old Rhinebeck Aerodrome raised $215. Roberto Martinez was the lucky winner of the drawing. (2.) Becky Raymond reported that $6,000 was taken in at the recent Freedom From Fistula Foundation fundraiser. She thanked members who attended.

DRIVER TRAINING — Jim Leyhane, who is arranging a defensive driving training session that will qualify participants to receive a deduction on their auto insurance, said it will be held on a Sunday in June. He asked that anyone who would like to attend but has a conflict on any particular Sunday to let him know ASAP so he can finalize the date.

HEALTH UPDATES — Doris Calamaras is reported to be improving after a bout of pneumonia. … Stewart Wagner thanked the club for its support of he and Lois since her return home from hospitalization.

NEXT MEETING — 6:15 p.m. Thursday, May 19, at Quigley’s. We will have a program on “Let’s Share the Sun,” a program that shares solar energy devices with poor parts of the world.